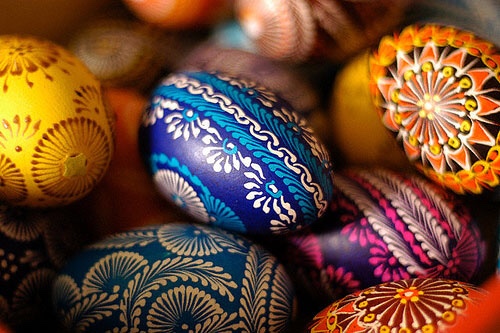 Easter eggs are little surprises that directors and writers

sometimes hide inside their movies as a bonus surprise for those willing to take a closer look.

Whether or not you are part of a family which included church attendance on Easter among their holiday traditions, it’s likely that you are at least somewhat familiar with the story of the man named Jesus who died and how he came to life again three days later announced by Angels and an empty tomb. As we approach Easter Sunday I wanted to encourage you to consider a second look at the Easter story. Here’s three Easter eggs you might have missed the first time around.

The Easter Story is Beautiful

Some stories are particularly beautiful and we are drawn to this beauty. When a book or movie strikes us as truly beautiful it often produces an almost painful longing in our hope that such beauty is real.

Some people speak of these kinds of stories as being a sort of shadow of deeper universal truths. I agree with this, but what’s amazing about the Easter story is that it’s not just another one of these shadows.

It is the glorious light from which all these other stories get their inspiration. It is the absolute beauty which is merely reached for, hinted at, and approximated in every other beautiful story or song or piece of art you’ve ever been moved by. It not only speaks of all the themes we love–of justice, redemption, heroes, fellowship, resurrection, sacrifice, and a beautiful new home–but is the reality from which these themes come. It is because we are seeking the precise beauty of the Easter story that we find joy and longing in these stories which approximate it.

Well, you might disagree, but until you look, how can you be sure? The Easter Story deserves a second look for its beauty alone.

The Easter Story is True

We’ve already talked about one sense in which the Easter story is true. In the way it captures grand beautiful truths of the universe. This is the way in which many people view the Easter story. They’ve found this first Easter egg but stopped short of finding the second. Here I mean not only that it is true in that it contains larger truths, but that it is also true in the historical sense.

I know that the claims of the Easter story are outrageous and large and it might seem a bridge too far to claim that it is in fact historical.

In truth there are many reasons to give the factual nature of the Easter Story a second look. As outrageous as the claims are there are also big reasons to give them credence. I won’t go into them all here, but would point you to the resource links at the bottom of this article if you’d like to engage with some of the best arguments for the factual nature of Jesus’ life, death, and resurrection.

I am persuaded by many convincing empirical and logical arguments of the history of the Easter story because I took another look.

But how can it be possible that the incredible claims of Easter are factual? Let me ask you a better question. What if it is true and you never spent the time to give the story a second look and see for yourself? This is truly an Easter egg of great value and to give up looking for it because it might not exist seems shortsighted, particularly when so many of your fellow human beings claim to have found precisely that valuable egg already.

The Easter Story is Powerful

You may have heard of C.S. Lewis as the author of the great children’s books about the land of Narnia. C.S. Lewis is the brilliant and prolific author of everything from fantasy and sci-fi books, to poetry, to some of the most important theological and cultural essays of the last two centuries.

Even if you’ve never heard of him, perhaps you’ve heard of his great friend and author of the Lord of the Rings, J.R.R. Tolkien.

Now what Dyson and Tolkien showed me was this: that if I met the idea of sacrifice in a Pagan story I didn’t mind it at all: again, that if I met the idea of a god sacrificing himself to himself … I liked it very much and was mysteriously moved by it: again, that the idea of the dying and reviving god (Balder, Adonis, Bacchus) similarly moved me provided I met it anywhere except in the Gospels. The reason was that in Pagan stories I was prepared to feel the myth as profound and suggestive of meanings beyond my grasp even tho’ I could not say in cold prose ‘what it meant’. Now the story of Christ is simply a true myth: a myth working on us in the same way as the others, but with this tremendous difference that it really happened.

Lewis began to recognize that the true power of the Gospel was in the fact that it was both beautiful and true.

The third Easter egg worth exploring in the Easter story is the idea that it can profoundly change you. The Easter story tells us that while it is objectively true and while it is universally beautiful, it can also be powerful if we embrace the truth of it.

Merely to realize that the God of the universe loves you so much that he made himself a man, suffered as a man and conquered death to rescue you from the sin and selfishness to which you are enslaved can just by its recognition change a person profoundly. But the reality is even more astounding. When the God of the universe sacrifices Himself for the sake of His creation it unlocks a deeper magic of the universe (to use a phrase found in The Chronicles of Narnia), which truly and deeply changes those who embrace it.

Sometimes you’ll hear the Easter Story referred to as the Gospel by those who believe it. Gospel just means good news, and this is what it is. It is the best news because it is the truest beauty and the most beautiful truth and as Paul says, “The Gospel is the power of God for those who believe.”

If you’d like to take a second look at the Gospel, you could attend one of the many Easter services in a local church this weekend. Listen with ears ready to hear something of beauty and truth and power. Focus Church will be gathering this Sunday Night at 6:00 pm to celebrate Easter if you’d like to join us. Click the link for details.

Here are some other resources:

The New Evidence That Demands A Verdict: Evidence I & II Fully Updated in One Volume To Answer The Questions Challenging Christians in the 21st Century. (This is a two volume book of historical references and evidence for the historical reality of the Gospel.)

Seven Themes You Can’t Escape. (A book I wrote on the beautiful themes of the Gospel working their way into every story we love. If you order it this weekend and use the coupon code Beauty, you’ll get 50 percent off.)

The Hidden Life. (Another book I wrote, this one on the power of the Gospel. Similar deal as the one mentioned above. Use the coupon code Power and I’ll give you 50 percent off. If you order both just use either code and get 50 percent off both.)

Mere Christianity by Lewis, C. S. (2012) Hardcover. (I can’t give you a discount on this one because I didn’t write it. This is a very good book on the essence of Christianity, worth a look if you want a smart take on the Gospel.)

The Chronicles Of Narnia: The Lion, the Witch & the Wardrobe. (This is Lewis’ powerful story which uses a fictional setting to elucidate the power and beauty of the Gospel.)